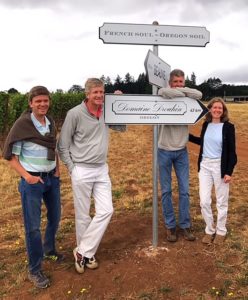 If one were to dream up a wine trip out to the western United States, Napa Valley or Sonoma County might first come to mind. But if what you’re really hoping for is a serene vineyard experience between the mountains and the valley—Oregon is where you should set your sights. 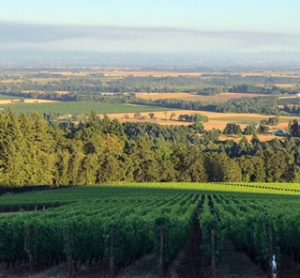 On my first trip to Oregon, I was lucky enough to meet the Drouhin Family who established an incredible vineyard in the late 1980s. Their winemaking roots were actually planted in Burgundy, France a century earlier, when Joseph Drouhin moved from Chablis to Beaune where he founded Maison Joseph Drouhin. He was succeeded by his son, the brilliant Maurice Drouhin, who dedicated his life to making fine wine. In 1957, Robert Drouhin became the third generation to run the business. He first “discovered” Oregon on a 1961 visit, and then again during the 1979 and ’80 blind tastings in Paris and Burgundy (the latter of which Robert organized) that put Oregon wines on the world map. Robert recognized that it was in Oregon, more so than California, where the soils and climate could unlock the complexities and potential of Pinot Noir and Chardonnay in the United States. 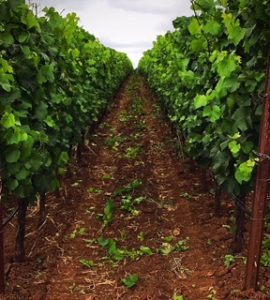 In 1986, Robert’s daughter Véronique came to the states at the age of 24 to oversee the planting of what today is called Domaine Drouhin. She interned with the masters like Robert Mondavi to better understand the complexities of Oregon winemaking. Each of Robert’s four children have taken active roles in the business, from the wine chemistry, to sales, to running the company.

On Domaine Drouhin’s 30th anniversary (which they celebrated last July), Véronique uncorked bottles from her first vintage to find that they were still wonderfully drinkable. With her children at her side, the fifth generation is waiting in the wings for their place in the business, a true family affair. What is remarkable are the lessons the family has translated from their winemaking in Burgundy, France to the Dundee Hills in Oregon, and from the Dundee Hills to Burgundy. 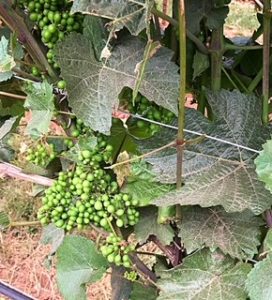 From France, the family has gleaned the elegant skills of true winemaking mastery. Phillippe Drouhin, the family vintner, has extensively studied the science behind fine wine and translated that into how he monitors the conditions in which the family vines are grown in Oregon. He regularly has his soil samples excavated so he can see what is influencing the taste of Drouhin grapes.

From Oregon, the Drouhin Family learned the importance of opening up their Burgundy vineyards to tourists and allowing them to experience their wines on site and make a purchase before they leave. This has allowed them to build long-lasting relationships with their most loyal customers. 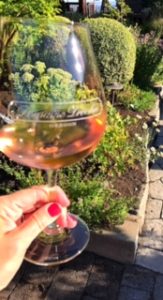 The Drouhin Family is exemplary in making their guests an extension of the five generations who are a part of the family’s winemaking. This adds to the comfortable aesthetic of staying in the northern part of the Willamette Valley in the Pacific Northwest.

Not one to ever really camp, I was intrigued by the idea of staying at The Vintages Trailer Resort, just 10 minutes away from Domaine Drouhin. Centrally located in the heart of the Willamette Valley, the Vintages offers retro trailer accommodations on a 14-acre park. These trailers (some dating back to the 1940s) have been meticulously restored and outfitted with luxurious modern amenities, like pour-over Caravan Coffee, luxurious terrycloth robes, comfortable mattresses and fine hotel-quality linens. Most trailers include a private toilet, and many include showers, too (if not, there’s a lovely clubhouse and fitness center, complete with showers and restrooms). 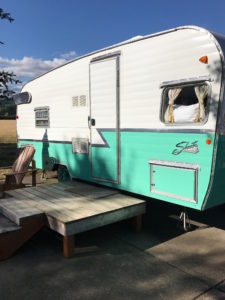 Other offerings include propane grills, a pool and hot tub, outdoor lawn games, and a nearby dog park. The Vintages also provide cruiser bikes you can pedal over the bridge to the neighboring town of Dayton. Their General Store is filled with must-have souvenirs you can’t leave without.

The Vintages has a faithful weekend following where nearly every pristine trailer becomes occupied by a wine-country enthusiast. With the clear evening sky illuminating the twinkling stars with a picturesque mountain backdrop, the Vintages community comes to life—and is one to be enjoyed. 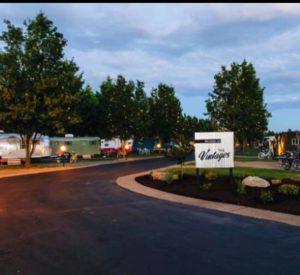 My name is Ann Marie Scheidler and I'm thrilled you've decided to check out my blog. I'm a pearl-loving yogi with a thing for travel, a weakness for beautiful bags, and a passion for storytelling. On Ann Marie On The Shore, I'll be sharing my wellness journey, go-to recipes, style favorites, and my love for Chicago’s North Shore. I find new inspiration wherever I am—thanks for coming along for the ride. Read More…

Find out all that's new on Ann Marie On The Shore right from your inbox! Sign up for our e-newsletter today! xo